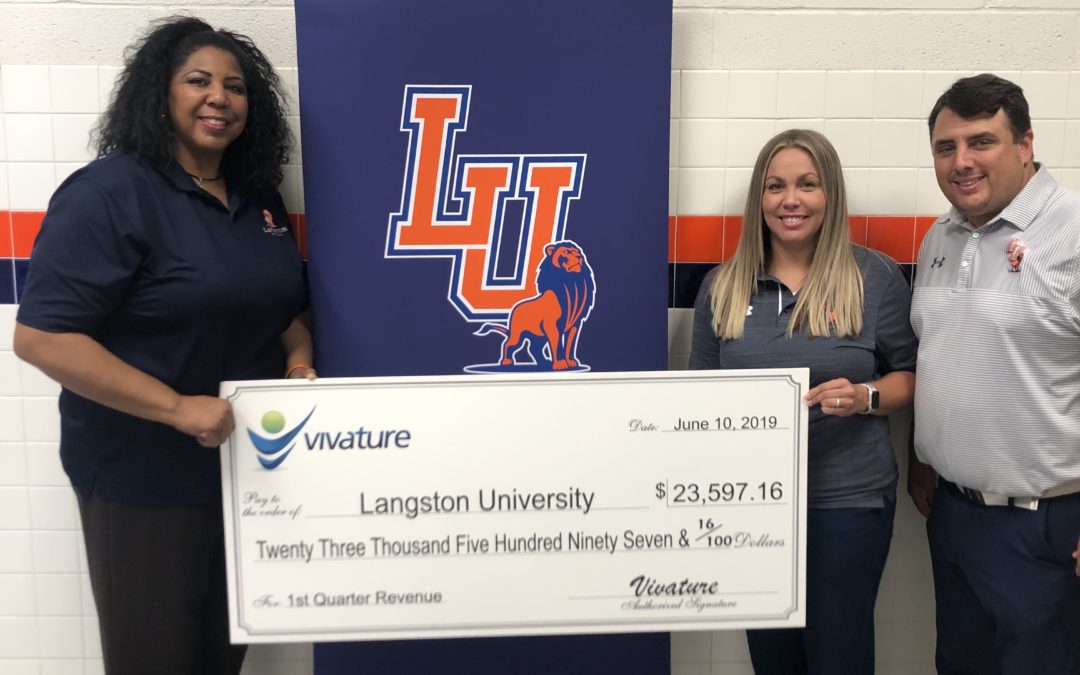 Not even a year after signing on as partners with Vivature, Langston University happily collected their first revenue check. The check, totaling $23,597.16 to Langston University in the first quarter of 2019, stemmed from medical billing for services performed in their Sports Medicine Clinic. As the pictures indicated, Langston’s Director of Athletics and Athletic Training staff were beyond excited to see the revenue steadily flowing in.

“Finding ways to supplement budget needs is a difficult task for most athletic departments. Most fundraising ideas are all hype with low returns. Vivature far exceeded my expectations. Not only did it provide the technology to streamline our student athlete’s medical information, but it provided a significant income source to our sports medicine program” 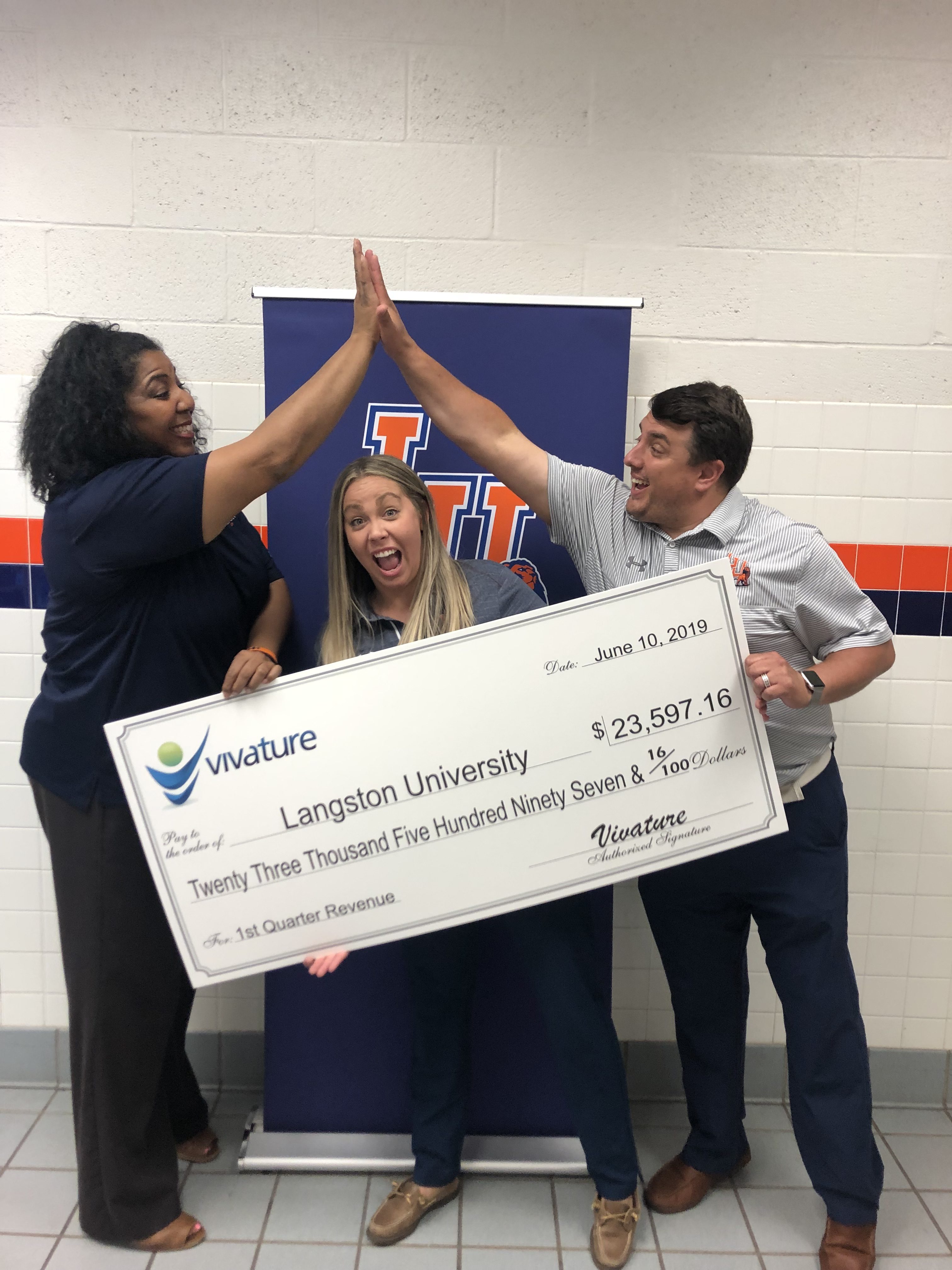 Langston University’s Head Athletic Trainer, Ross McCullough was quick to add, “Our success could not have been made possible without the help and support from the university, administrative team, sports medicine staff, coaches, athletes and last but not least, a HUGE ‘Thank You’ to Vivature and our Account Manager, Mandi, for working with us to make this possible”. 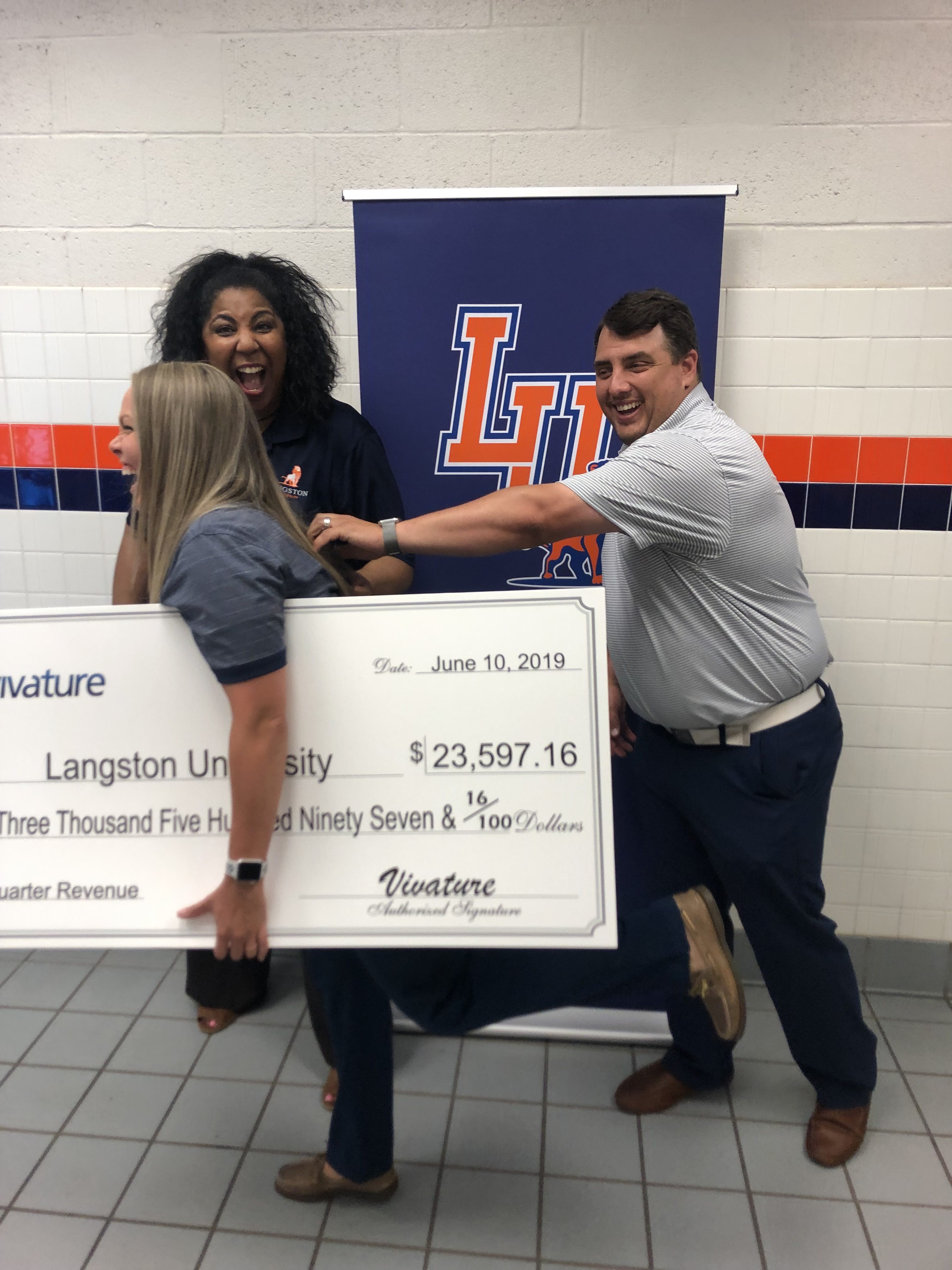 “Clients like Langston University’s Athletic Department that pull everyone together quickly onboard, have the best results. Their team effort is simply amazing, and seeing them reach their financial goals for budgeting, makes for an excellent partnership….partners that we are proud to have. Their dedication to their student athletes’ healthcare is apparent, as well as their ambitious energy as an entire staff”, stated Lance Wilson, Executive Vice President of Vivature.

ABOUT LANGSTON UNIVERSITY Founded in 1897, Langston University is comprised of three campuses located in Langston, Oklahoma City, and Tulsa. The Langston campus offers programs such as biology, chemistry, nursing, urban education, international studies, goat research, physical therapy (a doctoral program) and biotechnology. The LU-OKC and LU-Tulsa campuses offer upper division courses and graduate courses that are ideal for students who have completed their associate’s degree and wish to pursue a bachelor’s degree or a master’s degree. Some of the programs offered on these campuses include accounting, psychology, urban education, rehabilitation counseling and organizational leadership.

An alumnus of Northwestern Oklahoma State University and a member of the Athletic Hall-of-Fame, Donnita Drain Rogers’ strong leadership at Langston University’s Athletic department has been proven time and again, As the head women’s basketball coach, she led the Lady Lions to six NAIA Division l National Tournament appearances. She has also had more wins than any other Langston University women’s basketball coach in their history and finished her tenure as head basketball coach with nine consecutive winning seasons prior to coaching at Grambling State University, and serving as the first head boys basketball coach in Caddo Parrish at 3A high school, Booker T. Washington (located in Shreveport, LA). To add to her impressive resume, Drain Rogers was also selected as the Red River Athletic Conference Athletic Director of the year in 2017-2018.

Langston University teams, bearing the sport name of the Lions, are part of the Sooner Athletic Conference in the NAIA. Men’s sports include basketball, football, and track & field; while women’s sports include basketball, cheerleading, softball, track & field and volleyball. There is also a co-ed club soccer program. The Lions won the 1939 and 1941 HBCU National Championships in football. Langston won two HBCU National Championships in basketball in 1944 and 1946. Langston’s marching band is known as the “Langston University Marching Pride”. It is a major ambassador of the university, a supporter at athletic events, and serves as a training center for students interested in pursuing a career in music and/or developing pertinent life skills. Charlie Wilson, of GAP Band fame, once served as Drum Major. As of 2017, the band has won three bids to the Honda Battle of the Bands in the Georgia Dome since the inaugural event in 2003.

Vivature is very proud to have prestigious and ambitious clients such as Langston University, on their roster and looks forward to a continuing prosperous relationship.

ABOUT VIVATURE Dallas, Texas based firm was recently named one of the “Top 25 Emerging Sports Technology Firms” in the country, and now has more than 400 collegiate partners. Vivature uses a $20+ million enterprise-level single database, and their VIVAiQ (formerly known as “NExTT”) software to make college and university sports medicine departments compliant with all federal and state medical regulations by properly recording student-athlete injuries and treatments being conducted as required by law, as well as providing the NExTT 360 solution by recording and improving student-athlete care in the areas of Nutrition, Counseling, Academic Counseling and Strength & Conditioning (KONGiQ).

This website uses cookies to improve your experience while you navigate through the website. Out of these cookies, the cookies that are categorized as necessary are stored on your browser as they are essential for the working of basic functionalities of the website. We also use third-party cookies that help us analyze and understand how you use this website. These cookies will be stored in your browser only with your consent. You also have the option to opt-out of these cookies. But opting out of some of these cookies may have an effect on your browsing experience.
Necessary Always Enabled
Necessary cookies are absolutely essential for the website to function properly. This category only includes cookies that ensures basic functionalities and security features of the website. These cookies do not store any personal information.
Non-necessary
Any cookies that may not be particularly necessary for the website to function and is used specifically to collect user personal data via analytics, ads, other embedded contents are termed as non-necessary cookies. It is mandatory to procure user consent prior to running these cookies on your website.
SAVE & ACCEPT